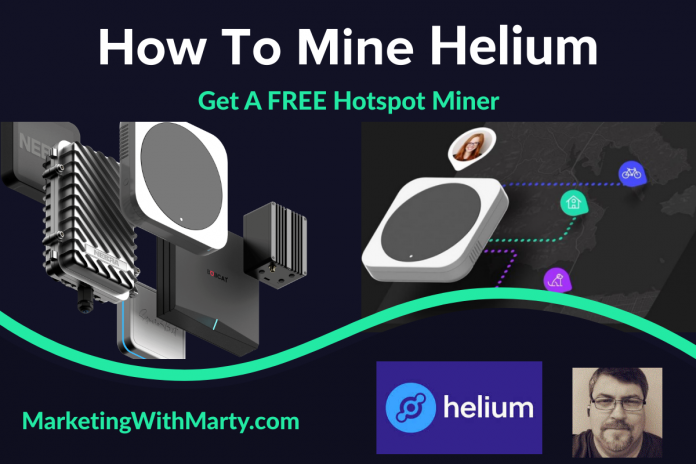 How To Mine Helium Tokens (HNT)

Helium is a cryptocurrency that uses peer-to-peer technology to operate with no central authority or banks; managing transactions and the issuing of tokens are carried out collectively by the network. Mining is a competitive endeavor, with more people interested in it than there are tokens to be mined as the network matures. The mining gets faster and harder as time goes on, so keep up!

In the crypto world, helium is one of the most popular coins. It’s a cryptocurrency that uses peer-to-peer technology to operate with no central authority or banks; managing transactions and the issuing of tokens are carried out collectively by the network. At the time of this article, Helium is around $14 USD

If you want to mine helium tokens for yourself, here’s how:

First off, you need some computing power.

The best option is to use hardware based mining equipment such as the RAK or Nebra approved vendors.  There are even free hotspot miners available now from iHub Global where I have listed the links at the bottom.

The entire goal of mining it is to show Proof Of Coverage, which helps solidify the quality of the network by showing nearby hotspots.

As of this writing (August, 2021), there is a supply shortage of semiconductors as well as shipping delays from China’s manufacturing plants.  While batches are being delivered, they are usually arriving in around the 7 week timeframe from when they are requested.

The helium (HNT) cryptocurrency is a relatively new token that came about in May of 2018. The helium blockchain uses peer-to-peer technology to operate without any central authority or banks managing transactions and the issuing of tokens collectively by the network. Mining helium is a competitive endeavor, with more people interested in it than there are tokens to be mined as the network matures. As such, helium mining becomes faster and takes up more resources as time goes on. There is hope, however, because helium mining can be done using either your own computer, an external one through a service like Amazon Web Services (AWS) or even your own mining equipment that you can install at home.

The helium cryptocurrency is a DLT, or decentralized ledger technology, that offers several advantages. Some of these include peer-to-peer interactions with no central authority, the lack of computational transaction fees and the ability to make a variety of transactions without any single point of failure.

The helium network is also very large, with thousands of computers in a helium mining pool. It’s proven to be safe from cyberattacks and outside interference, which means helium tokens are always secure and can never be lost.

Some people might think helium would be difficult for beginners to mine because it uses high level computing power. They needn’t worry as helium mining can also be done using inexpensive equipment such as the Nebra approved vendors that cost less than a few hundred dollars.

As helium is a cryptocurrency, it’s important to remember that helium mining can be very competitive. As such, helium miners need to stay on top of their game or they could get left behind as the difficulty level increases. Here are some tips for doing well at helium mining:

The helium network is also very large, with thousands in mining pool computing power so it’s proven safe from cyberattacks and outside interference which means helium tokens are always secure and can never be lost. There are even free hotspot miners available now through iHub Global!

Helium has been one of the most popular cryptocurrencies since its release thanks to its security features as well as how easy it is for beginners to mine (even if they’re not tech savvy).

Why Do We Need The Helium Network?

The main purpose of HNT is to power the internet of things (or IoT) which is the network of physical devices, vehicles, home appliances and other items embedded with electronics, software, sensors and connectivity which enables these objects to collect and exchange data. IoT is a system that connects physical devices such as smartphones or wearables so they can communicate with each other without requiring human-to-human or human-to-computer interaction.

It’s hard to imagine now but in the future we could have our entire lives managed through a virtual dashboard – from getting up in the morning to going to bed at night. The possibilities are endless!  What will you do when anything you want to know about your home will be accessible? What if all your family photos were available on your phone? What if you could turn your lights on just by thinking about it? And what if we solved the energy crisis for good, through clean energy produced in our own homes?

Proponents of the IoT say that having all these connections will make our lives easier and more efficient.

IoT devices are becoming ever more popular and they also require bandwidth and resources to power them all, which is why the Helium network was created.

The goal is to create the “People’s Network” that is independent and powered purely by HNT hotspots and network resources.

If you want to get started on helium mining now, I recommend that you start by claiming one of the free Helium Hotspot Miners from iHub Global by using the link below.

Newspaper is your news, entertainment, music fashion website. We provide you with the latest breaking news and videos straight from the entertainment industry.
Contact us: [email protected]

How To Get 5001 Profit Producing Emails That Have Generated Millions...

🤴 Not even Hollywood celebrities can buy their way into this...